It has, yet again, been a while.  Life continues turning and things moved aside to accommodate new additions to the circle. This seems to be the time of year I look toward reading blogs the most, which sparks my interest in returning to blogging.

My favourite hobby is writing.  I love to be awake while the rest of the house is sleeping and add to what ever story my heart has forged.  And lately, when the story forging isn't going so well, as it tends to do, I turn to my blog and write an entry.

While being immersed in this year's round of curriculum planning, I have found there is a large gap in information for the Waldorf grades.  I have my few favourite blogs and websites where I find information and inspiration, but on the whole, most websites and blogs out there are geared towards the magical early years of childhood.

Are they in school?

Do they not want that part of their life shared?

Are the parents just too busy bringing the world to their children to be posting about them?

This last one, I get.  I've been there myself, and is the reason this blog is so often abandoned.

But I also find that in this new season of life, a season that is built around children who are growing in independence and who need me in a different way, I have an urge to share what we are doing.  An urge to say "We are here!  We are in the grades! We want to share with you and hear what YOU are doing!"

So slowly, I will be picking up my blog where it left off.  Focusing on a life inspired by Rudolf Steiner, showing you how we integrate and implement his many ideas and vision of what childhood could look like.

And also show you how we make this fit in to our modern world.

I do hope you will join me again!

We started our first math block of second grade at the beginning of October.  During this block we will cover even and odd numbers, roman numerals (because we skipped them last year) and a general review of the four processes.

We started the block off with roman numerals.  I introduced them in a circle (day one I-V, day two VI - X) through a simple story about children counting apple trees in orchards. As I told the story, we used toothpicks to create the roman numerals and then added the jewels and number cards to further reinforce the meaning of each roam numeral. 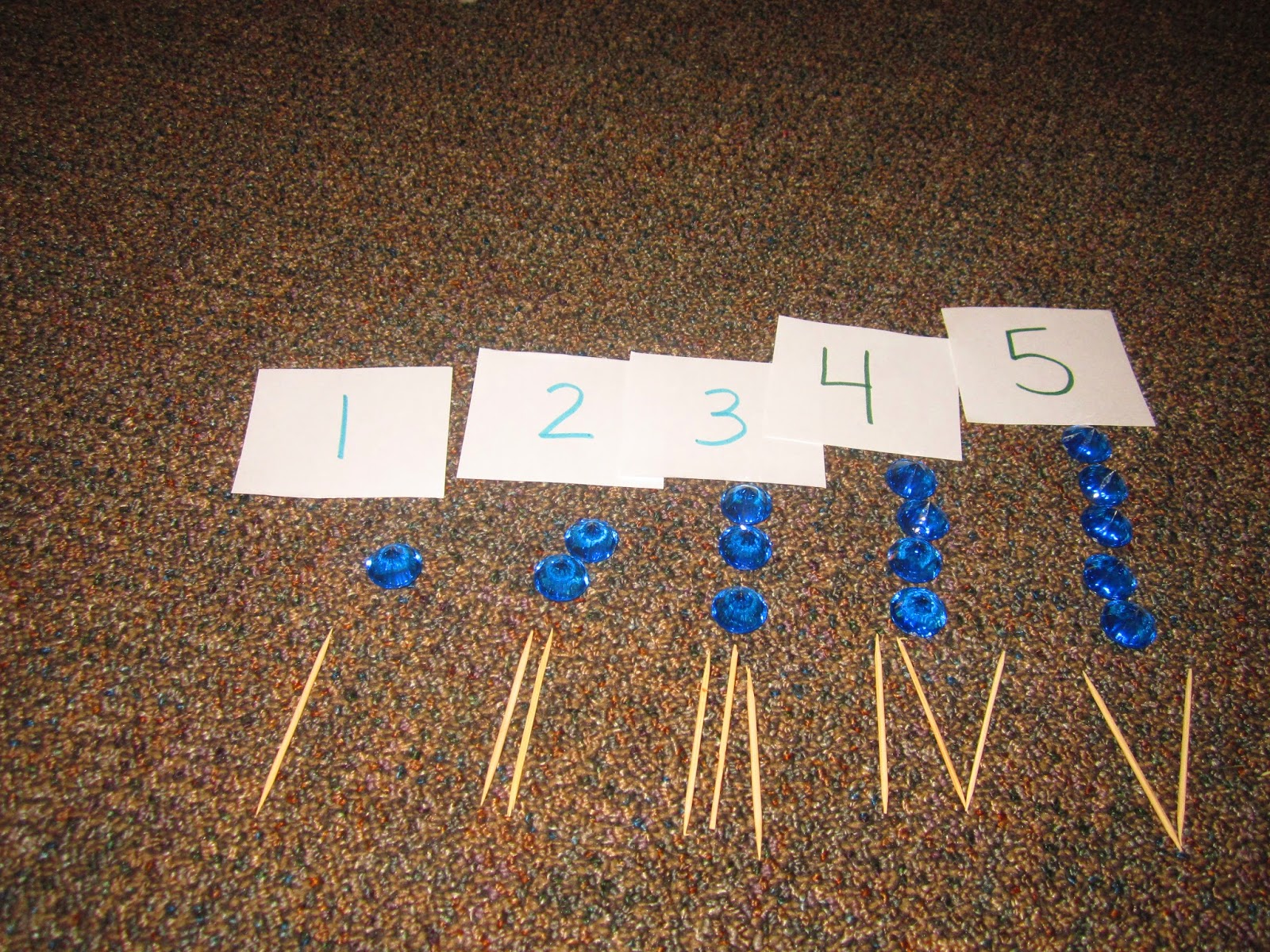 At the table, my son created a list of all the roman numerals with all the equal identifiers.  We included number words in this because my son has a tendancy to not recognize the words at sight, with the exception of a few, so we added them in for practice.  Then, he wanted to do his daily situational problems with roman numerals instead of arabic, so I said go for it!  So fun! 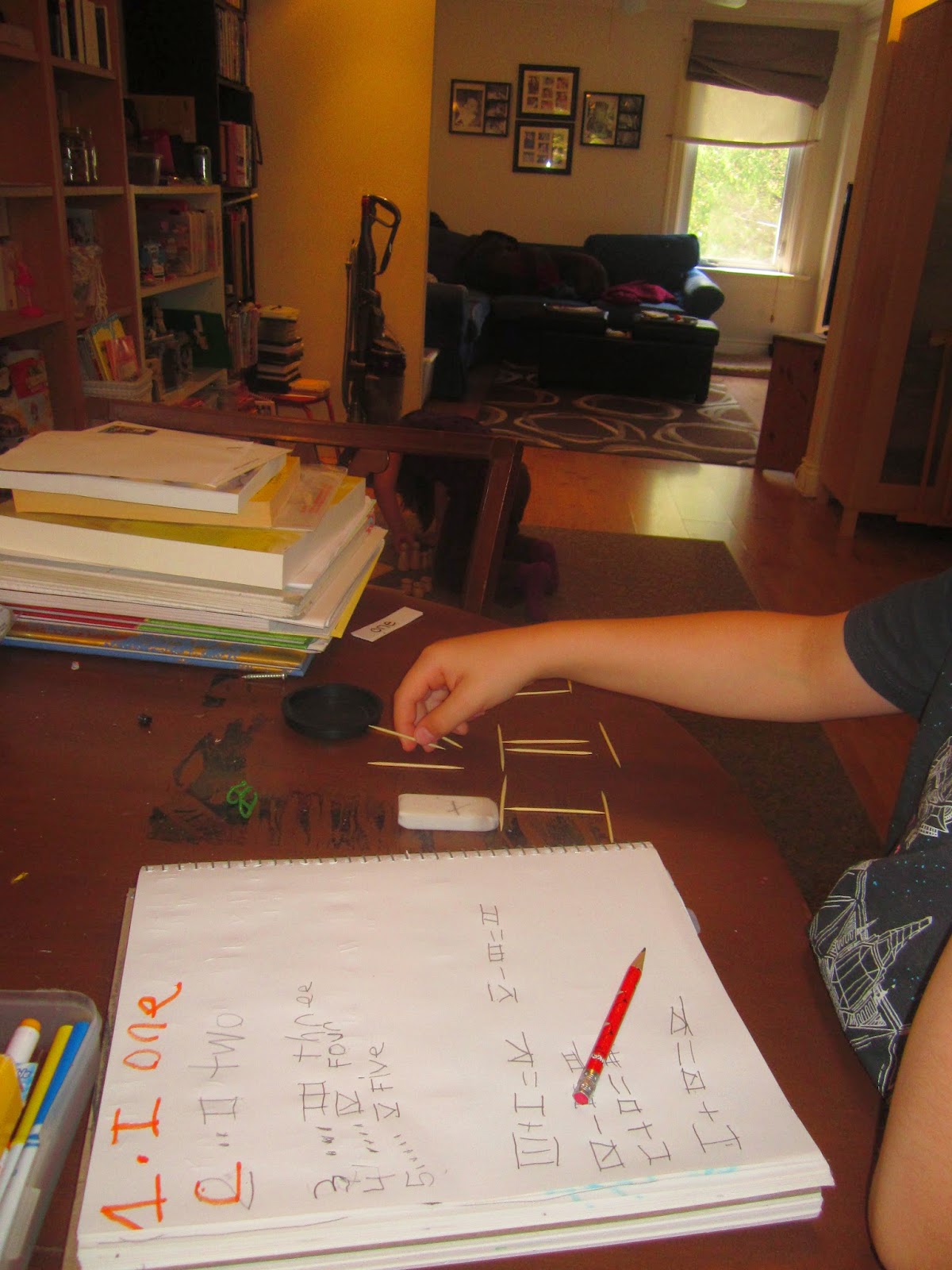 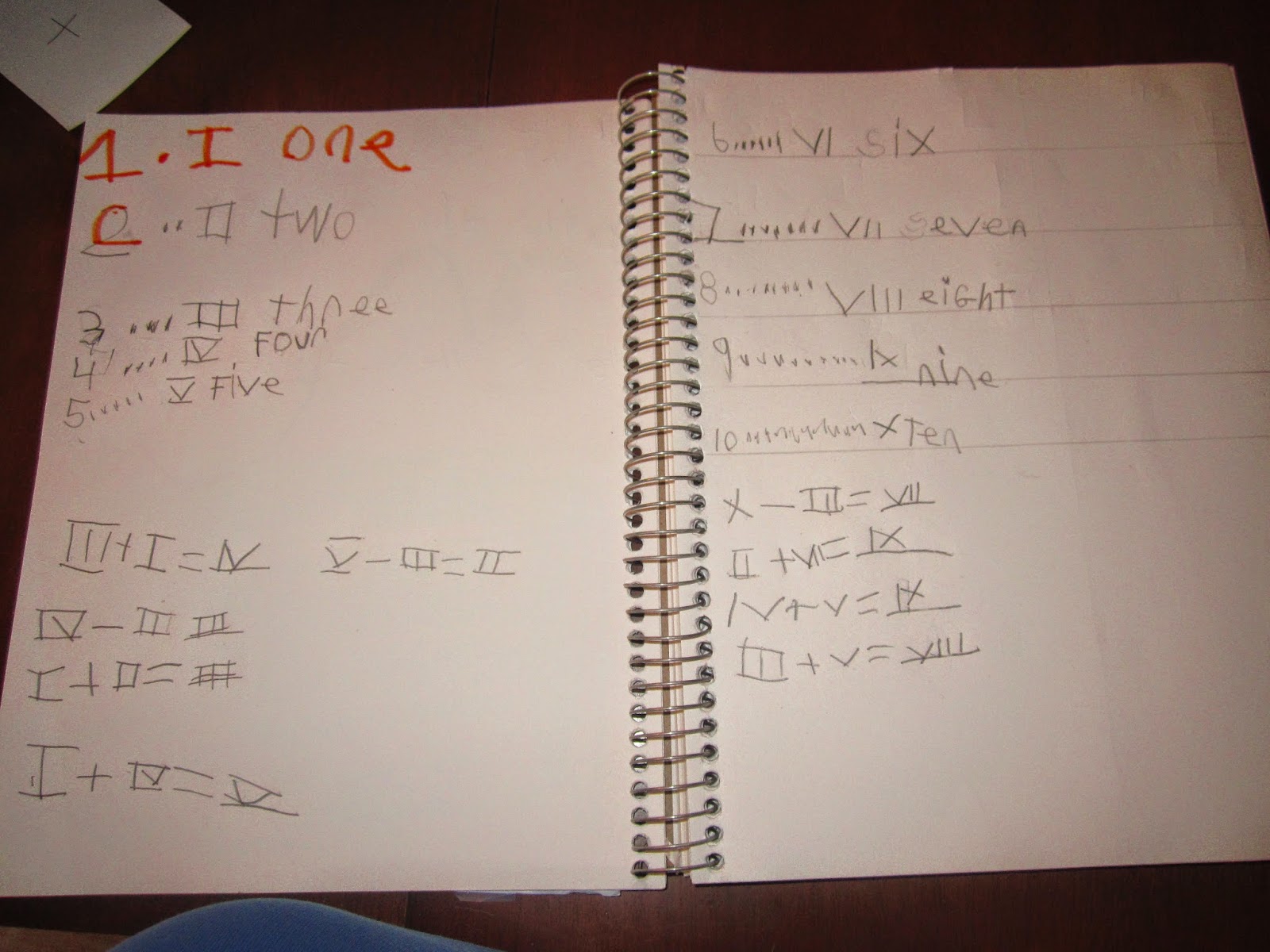 The next week we focused on even and odd numbers.  We had two knights on the table who could only keep bags of treasure if it could be equally shared.  My son would count the total in each pile, divide them between the two knights and depending on the answer would write the total under even or odd in his main lesson book.  Each day we used a different "treasure". 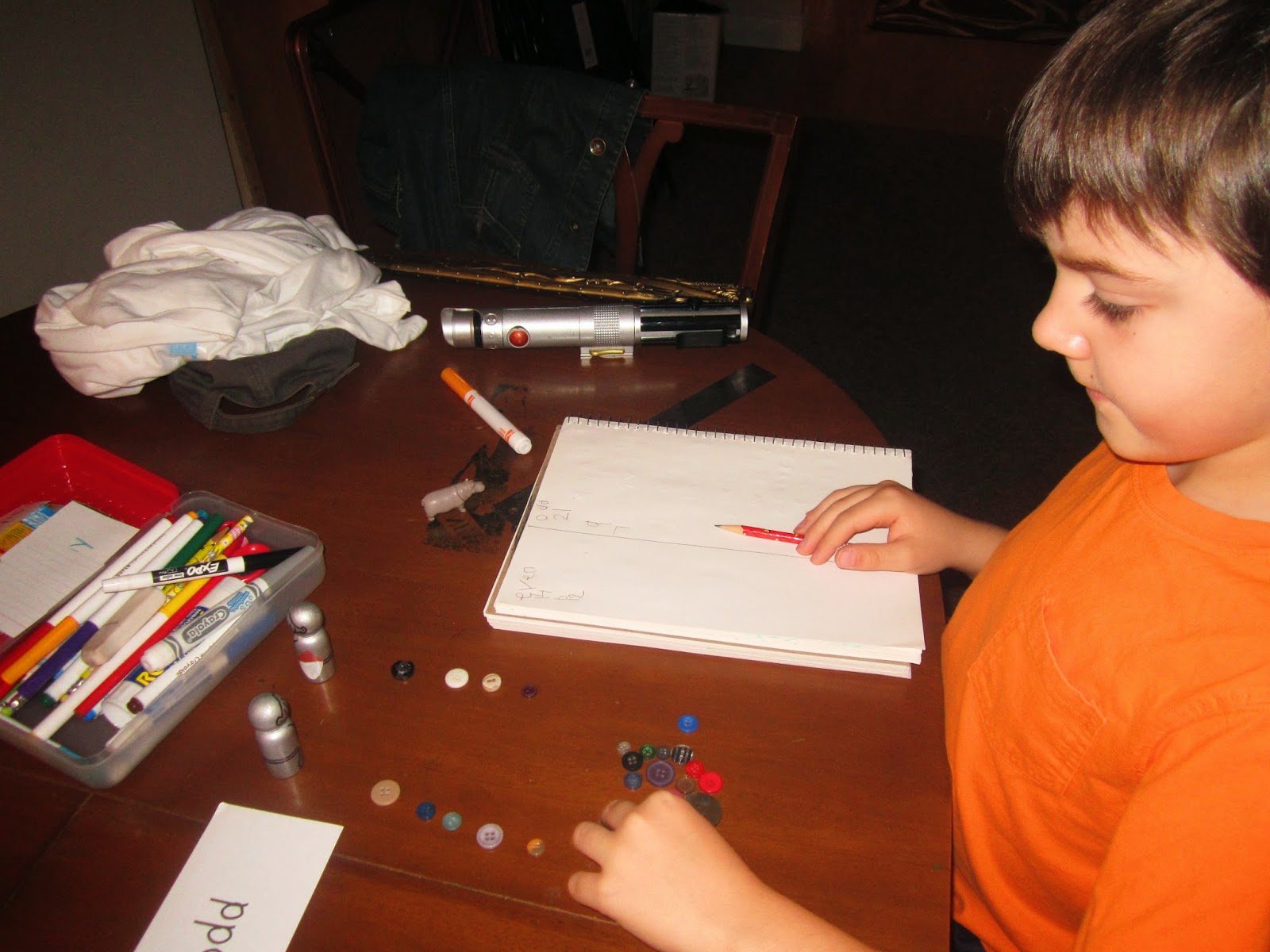 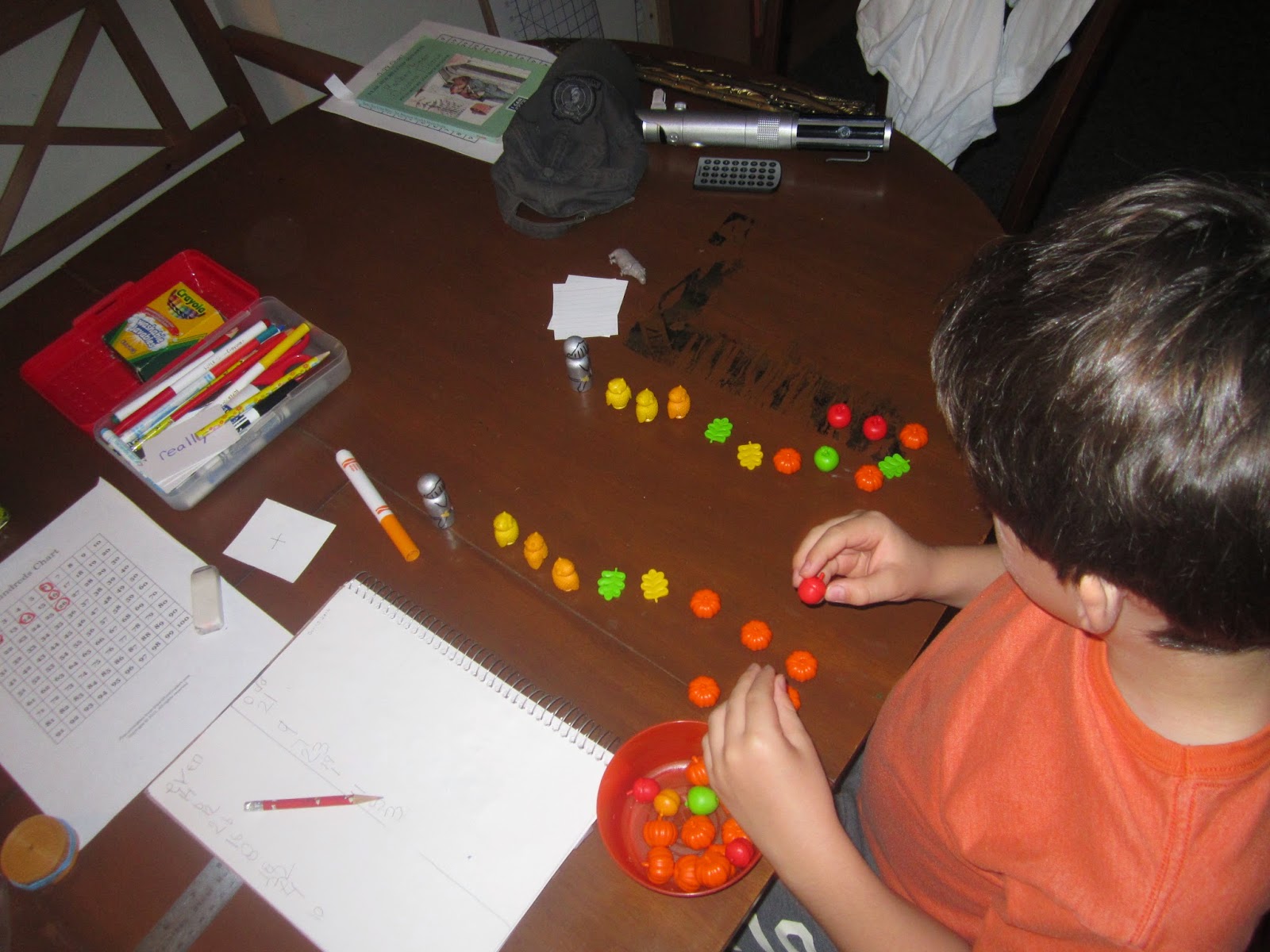 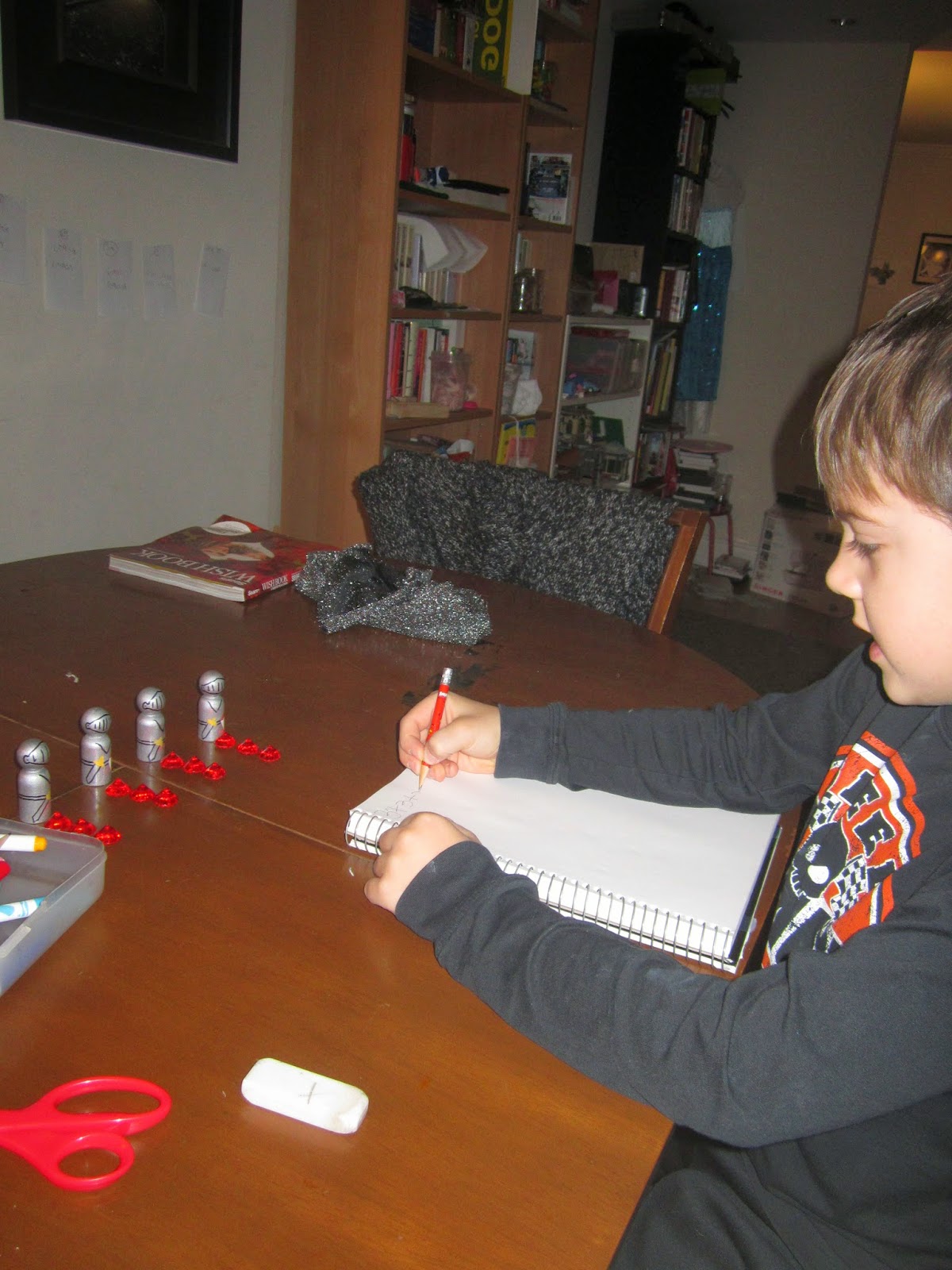 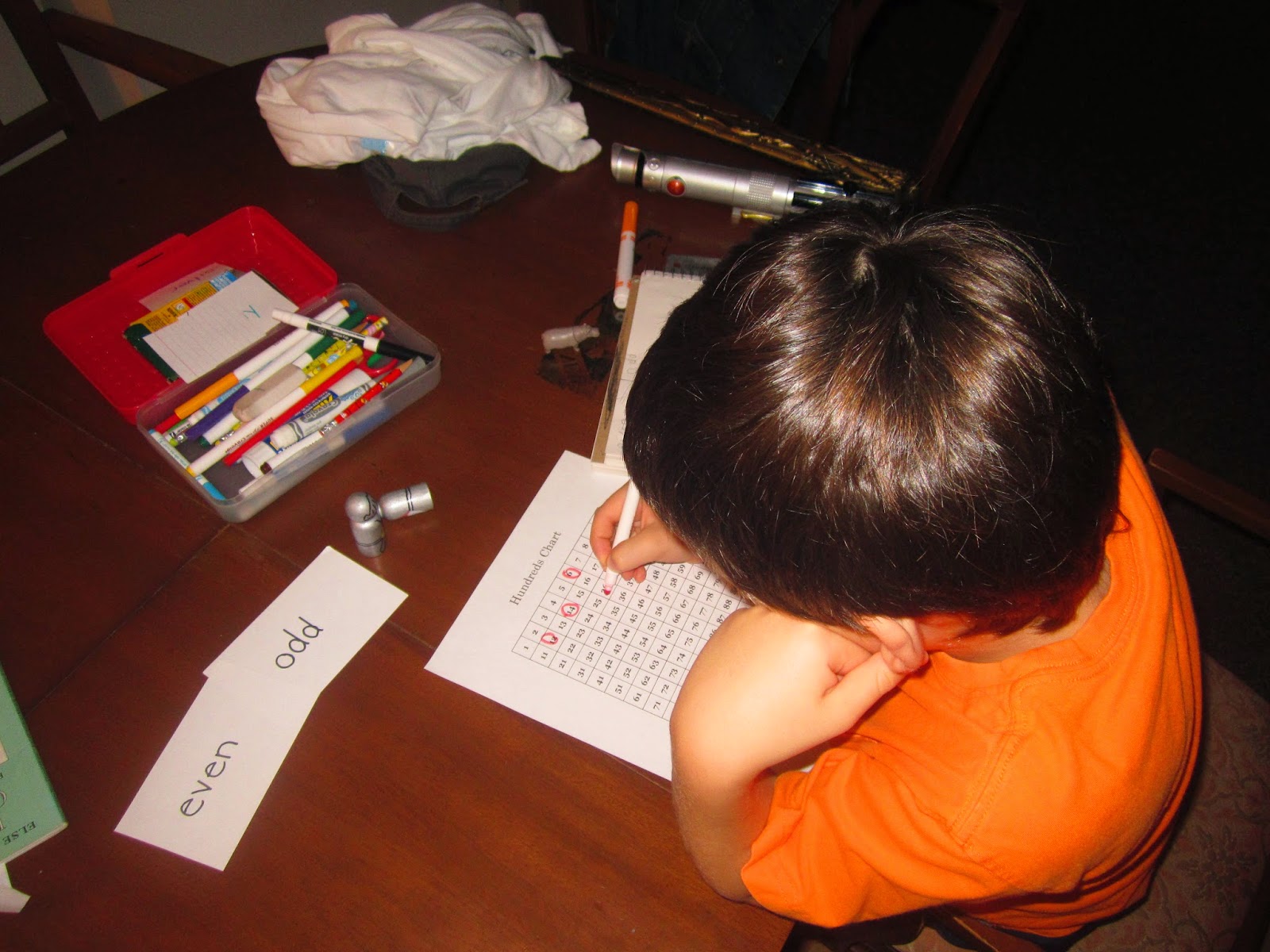 These last two weeks of the month will be deticated to reviewing roman numerals, even and odd numbers and reviewing the four processes.  We will do this through situational stories that are then transfered to the main lesson book. Today we used our knights again and gave them jewels to share and add together.  My son also expanded roman numerals to show how they are really all just addition and subtraction. He figured this out on his own and used his main lesson book to illustrate while he was explaining his findings to me.

We have had a lot of fun with this block, and I'll be honest saying that I was a bit worried about it.  Last year we used mostly JUMP math workbooks, which my son still loves and will do a page or two each day, and this is the first time we have done math with a more waldorf feel to it.  I have been pleasently surprised at how he has really taken to the way things are brought to him and I think he has much better retention this way than with the worksheets.

Next blog post I will share some of the simple stories we use for our situational problems.

Posted by Fantastic Homeschool Family at 7:28 PM
Email ThisBlogThis!Share to TwitterShare to FacebookShare to Pinterest
0 comments

Praying to the Angels

I haven't ever been big on prayer.

We weren't a religious family growing up.  We are Catholics, did the whole Sunday school thing because that is what you did as a catholic kid, but rarely went to church on Sundays. Our Sunday school was actually on Saturday mornings, which made Sundays a non-issue.  Maybe that was the beginning of the end.  They did get smart though, and now Sunday school is back on Sundays.

My point, we were what I like to call convenient Catholics.  Did it when we needed to, ignored it when we didn't.

Now this doesn't mean my family wasn't/isn't spiritual.  My mom read to me from the bible, we were taught that Christmas and Easter were about Jesus and not a big guy or a bunny.  We were encouraged to believe in god.  We just didn't do the whole church thing.

As I became older and the church became more separated from the spirituality, I became more spiritual.  When in times of struggle, I found myself calling upon spirits to help guide my decisions.  It was a knee jerk reaction, often done in a pleading and aggressive nature, but the underlying truth is that I did believe there was something out there that moving the pieces of the puzzle.

Since I've become a parent, I've relied on my spirituality in a different way.

My oldest has always talked about angles.  I don't know if he saw them when he was a baby, heard someone say something about them, or just learned about their existence through the stories that have been read to him, but he has always described a connection to them.

It was when our family dog died three years ago that angels really became a strong part of his beliefs.  He believed that our beloved Abbey was now his guardian angel.  His exact words were, "Now that Abbey is an angel, my angel can go keep another child safe.  Abbey will protect me."

A year later, as I was drowning in Waldorf research, about to start my journey in to this wonderful life and education style, I came across many references to angels.  Namely praying to your child's guardian angel for help and guidance.

This is a practice I have started myself.  It is often the side of Steiner that people begin to feel uncomfortable with.  He had some pretty distinct thoughts on spirituality.  And it isn't for everyone.  Like everything I do, I take what I like and leave the rest (in case you missed it, I have issues, check out number three here ), and that probably won't ever change.

It is taking a moment of calm.  Taking a breath instead of continuing to talk.  A way for me to reflect and not react.  A time to let it sleep.

In other words, it helps me to make better decisions instead of decisions in the heat of the moment.  Something that I work on on a daily basis.  And don't we as parents do that often?  We do or say something when we are frustrated or angry and then regret and worry and stress over it, wondering what damage we've done and how to repair it.  Taking a moment to say "I need to stop.  I can't make decisions right now," and then to listen to where your heart takes you once you have calmed down is not only a healthier option for us, it is a better thing for our children to see.

And anything that gets me to stop and breathe is something that is going to benefit everyone in my family.

Try it out and see where it takes you!

Posted by Fantastic Homeschool Family at 8:50 PM
Email ThisBlogThis!Share to TwitterShare to FacebookShare to Pinterest
0 comments